UPDATE (June 16, 2020): The park has been opened to vehicular traffic and most/all hiking trails are back open.

Additional restriction on Palomar Mountain State Park remain in effect so it is advised that you go to http://www.parks.ca.gov/?page_id=637 for the latest information.

The Boucher Tower Parking lot is open for vehicular traffic.

Boucher Lookout Tower is still closed to the public until further notice.

Boucher Hill fire tower sits at an elevation of 5,438 ft. (1657 m.) in Palomar Mountain State Park in northern San Diego County. According to the California Division of Forestry and Fire Protection lookout survey of 1991, a tower has been located on Boucher Hill since 1921.

The current lookout is a splendid example of a CDF 809R design. This tower was constructed and placed into service in 1948. Boucher Hill rests on a 16 x 16 foot base with a tower height of 30 feet. The tower was in service until 1983.

The California State Parks Department recently spent $343,000 on site improvements. A plan proposal calls for ongoing tower restoration and creation of a living history museum. Boucher Hill is a California Registered historical lookout and in addition to their lookout duties our volunteers are all trained as Docents of Palomar Mountain State Park.

The San Diego-Riverside Chapter of the Forest Fire Lookout Association (FFLA-SDRC) began staffing the tower with volunteers for fixed-point fire detection and visitor interpretation in 2012 and achieved a goal of 100% staffing during the 2014 fire season. FFLA-SDRC has achieved that same 100% fire season staffing for every year since with few exceptions due to weather or similar personal considerations

Boucher Lookout Tower is still closed to the public until further notice, usually when staffed, the tower is open for public tours and visitors are welcome to drive up to enjoy the beautiful panoramic view of northern San Diego County. Our volunteers are also State Park docents and are knowledgeable in the history and biology of the area. In 2016 the tower saw more than 11,000 visitors.

The tower typically opens on May 1st in conjunction with the beginning of the fire season and closes in early December. During this period the tower is typically staffed 7 days a week from 9am -5pm. 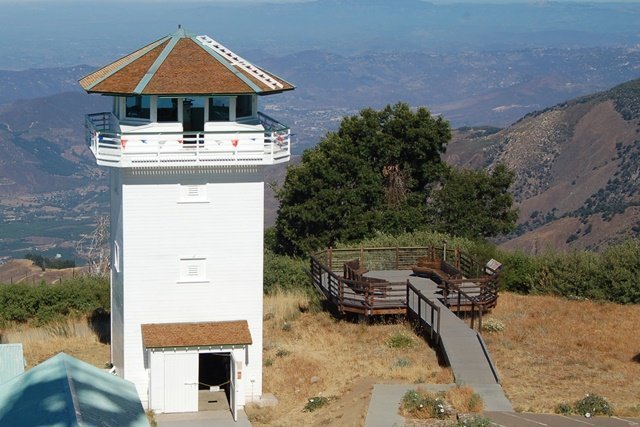 For further Boucher Hill information use the links below